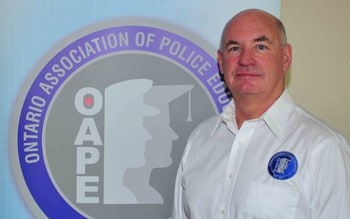 Mike Gobeil is an Instructor at the Ontario Police College and has been since 1998. Mike started his police career in Toronto in 1974 and then joined the Kingston Police. During the next 14 years Mike worked in a variety of assignments including the Emergency Response Unit, Traffic, Surveillance, Uniform and Community Services. In 1989, Mike was seconded to the Ministry of the Solicitor General, Policy Branch, as the Provincial Victim Assistance Training Co-ordinator. In 1991, he was seconded to the Ontario Police College as an Instructor. In 1993, Mike returned to Kingston to co-ordinate training and Use of Force initiatives and in 1996 he was also assigned the responsibility of Witness Assistance and Relocation officer. Mike joined the staff of the Ontario Police College in February of 1998. In April of 1999, he became Co-ordinator of Basic Recruit Training at the College. Presently he is responsible for the coordination of Domestic Violence, Elder Abuse and Victim Issues Training. Mike has been a member of OAPE since it’s beginnings in 1989.